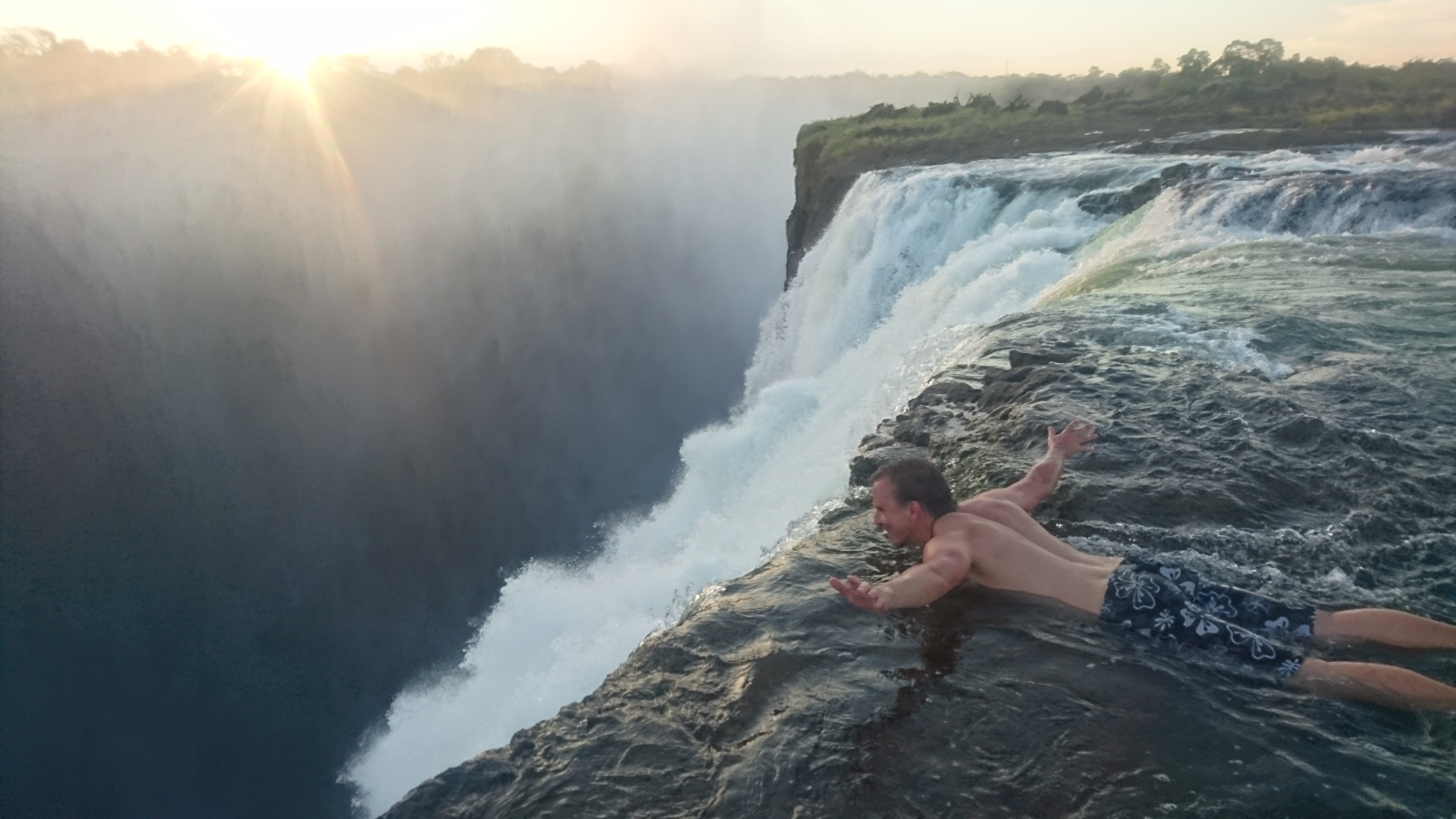 Firstly I have to apologise not for writing for so long time; I have been quite busy with all sorts of small things and tasks during these past months. So what happened in Zambia? It was exciting three weeks and the stay opened my eyes and showed me better perspective of life. I traveled from Windhoek to Livingstone which took me around 20 hours in a bus. Once again the easiest option was to take Intercape bus. There are also several other bus companies crossing the border but it’s a bit more difficult to get any information of those companies.

After travelling for two months in South Africa and Namibia, and crossing the border of Zambia, I could really feel the cultural shock of the real Africa. The scenery changed immediately since I saw all these small villages and people living in simple conditions. This was the moment to do something meaningful rather than just going from one place to another, which is why I decided to volunteer in a local community of Maramba.

There was a position available to work as a volunteer which is why I contacted the local non-governmental organization called New Hope Waves, and applied to volunteer in Maramba. I helped around the community for two weeks which is definitely not long enough to make change, but it was enough time to scratch the surface and get to know the culture and people better rather than just travelling around. I helped in Malota Community School and taught english to children from 7 to 15 years old. I was also busy with administrative tasks for the NGO. I’m creating them a website which is still not ready but hopefully within few weeks it can be published. I love these children and how they actually opened my eyes. Even I’m not working in Maramba any longer, I keep working on the project with a local NGO to hopefully make the future of these people a bit brighter. People walking around here may seem very happy compared to Europe but living in poverty is not a privilege. A roof over your head, food, health, running water and electricity are privileges. I am a lottery winner for being born in western country and would always give it all away to balance the world.

Maramba is a township located near Livingstone. Some of the friendliest people in the world lives there but it’s also a place where most of the people lives in poverty. Power cuts and water shortages are common phenomenas. There are no proper roads and the whole infrastructure needs a lot of improvement. I was happy to accommodate in Maramba near the market area, to actually live life in the same environment as the other people that I spent time with. It was nice to have my private room for the first time during my travels although I shared the apartment with some spiders, mosquitos, lizards and other insects. Spiders were my best friends since they helped me to get rid off  some of the mosquitos. Mosquitos are real serial killers since there is a risk of malaria in the area.

My days usually started 7 ‘o clock in the morning with a breakfast. After the breakfast I walked t0 Malota Community School which is located 15 minutes away from my compound. I had a separate class room where the children could come for english reading lessons. English books in Zambia are great! These books are full of interesting stories with good vocabulary. They have useful information of the common life in Zambia. Although I didn’t feel too comfortable reading a story with children, of Brenda who caught HIV for dating wrong kind of man.

After the school I usually went to Livingstone to get online and worked on the website. I was happy to contact my previous employer Sigmatic and my boss who was kind enough to sponsor hosting and domain for New Hope Waves. Hopefully the new website will attract more attention to the community. If you’re interested to volunteer or looking for internship placement, please don’t hesitate to contact me.

Zambia is a christian country and 80 percent of its population are religious. Even if you’re not religious or christian, I would recommend going to the church and attending to the service. I had nice and warm welcome there and the service is was very different from what I’m use to back in Finland. The service was happy event and the music was also awesome. It’s also good way to know local people and culture. Zambia is very easy country to travel in common. People are extremely friendly and helpful so don’t hesitate to ask help if you need some. I didn’t see any hustlers during my stay in Zambia but always use your common sense when talking to strangers. 🙂 Zambia is a cheap country to travel if you use same services and eat same food that locals do. Local buses are the cheapest way to get around in cities – 3 kwachas, 0.30e, shared taxi 5 kwachas  and private taxi 10 – 20 kwachas. Long-distance buses cost more, 140 kwachas from Livingstone to Lusaka, and 90 kwachas from Lusaka to Kapiri Mposhi. You can usually eat a good meal with 10 – 50 kwachas, beer usually costs from 8 – 12 kwachas. English is official language of Zambia but good way to make new friends is to learn few words of Nyanja.

From Zambia to Tanzania by train I traveled from Zambia to Tanzania by train but before that I had to travel from south to north through Zambia by two buses. The first bus was from Livingstone to Lusaka and the second bus was from Lusaka to Kapiri Mposhi. If you wish to travel by train I recommend buying a ticket a week in advance. You can buy the ticket from Lusaka or Kapiri Mposhi Tazara Offices. I paid 330 kwachas for the first class sleeper. If you travel at the time in some other town, you may also call to Lusaka or Kapiri Mposhi office and reserve the ticket, and pay it when you get to the ticket office.

Direct trains from Kapiri Mposhi to Dar Es Salaam goes twice a week, and the journey takes from 2 to 4 days depending on how well the train works and what are the weather conditions. Trains are very nice, clean and new, there is a restaurant car in the train, and prices there are reasonably cheap. The train also stops every once in a while in small villages on the way. There are many people are selling fruits, food and drinks in villages. I also recommend buying some schilling at the border since those are the only accepted currency after the border. My journey took almost three days, since there was some delay at the border. I didn’t mind the stop since I met other travellers and we went to explore the border city called Tunduma. We found a blue building which was the local pub. The owner seemed to be happy to get some foreign guests and offered us a round of beers. After the beers it was time to do some serious dancing with locals and we had pretty nice party going on in the end. It was the greatest train ride I have taken in my life. I enjoyed socialising with other people, enjoying the magnificent scenery and entertaining children of villages joggling flower sticks.

Where am I now?

After three days in a train I finally got to Dar Es Salaam on the evening but I had a problem of not having a place to sleep. Luckily I met these three fellow travellers in a train who were also heading to Zanzibar. They were couchsurfing in Dar, and they were kind enough to invite me to join them. Unfortunately their host didn’t have enough space for me and one other traveler but luckily he had a friend living close by where we were able to sleep on the floor.

The next day I was rushing to catch a mid-day ferry from Dar Es Salaam to Zanzibar. It was quite a miracle that I was able to make there on time since I didn’t even know where other part of our group and my backpack was in the morning. 😀

After I got to Zanzibar I stayed two nights in Stonetown sharing a double bed with a local Tanzanian. I traveled from Stonetown to Paje and lost the track of time. I have never seen so white and chill beaches in my life. I chilled in Page for over a week and almost forgot that I had a flight booked on 19th of December. I was actually prepared for this and set an alarm a day before my departure.

I flied from Zanzibar to Nairobi for a layover and continued to Mumbai. It was extremely shocking to be in the most chaotic place in the world after being in the most chilled place in the world. Kenya Airways lost my luggage so I was without clean clothes for a day before they found and delivered my backpack to my guest house. I had great two days in Mumbai eating almost everything the city has to offer.

I am now in northern part of Goa, got here by a train a week ago. I did some research before coming here and found a perfect place to still enjoy Goa as almost as it was before tourism took over Goa. This is the true paradise and I’m enjoying my new years eve here.